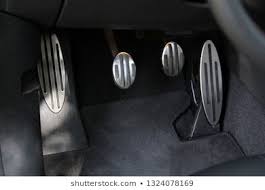 “So, you own a car with three pedals under the steering wheel. While manually-shifted cars have become nearly obsolete, many gearheads prefer to row gears as opposed to just “letting it happen” in that magical slushbox called an automatic transmission. There are few things more fun than dropping the clutch and hammering the throttle, as the tires are overcome by the torque and are quickly rendered to a boiling smoke show.

All of that on-off-on clutch-shifting action does a number on the clutch surfaces, eventually wearing them out. If you let it go too far, the flywheel gets eaten up by the rivets that hold the clutch friction plates to the disc itself. Owning a manual-shift car is lots of fun, however you need to be aware of some key points that will keep the fun going and not leave you stranded at the top of a hill hoping the emergency brake holds.

Anatomy of a Clutch

The standard, basic single-disc clutch is what a typical manual-shift car will almost always have from the factory. They are durable, have a good pedal feel and work great for low to medium performance. The manual transmission clutch is designed to transfer the power from the engine to the transmission as well as to sever that link when required. That doesn’t sound like much, but considering the massive power output of some vehicles, holding that connection without slipping is a tough job. There are two main types of clutches – disc- sprung hub and solid hub.

Most street clutches have a sprung hub. A series of six to eight springs are used to absorb a small amount of the impact from the spinning flywheel as it grabs the stationary clutch. This reduces the chatter and noise from the clutch. There are also a series of limit pins, think of them as bump stops, which are the maximum rotational limits for the hub-to-disc connection. If your hub springs are too light, then you will be bouncing off the limit pins, which results in chatter. There is another spring device often used in clutch discs- the Marcel spring. These are thin washer-type springs that sit between the disc and the clutch facing itself. A Marcel spring reduces chatter as well. Solid hubs are more race oriented, where chatter and smooth shifting is not an issue. Solid hub clutches do not last long on the street due to the vibrational fatigue on the splines.

Where the clutch does the hard work, the pressure plate is the mechanism that releases and engages the disc. There are three types of pressure plates – Diaphragm, Long, and Borg & Beck designs. Each has their own benefits in their useful areas.

Diaphragm pressure plates are the most common in street applications. This is what you think of when someone says “pressure plate”; the diaphragm is a series of long spring bars that fan out around the release bearing. These are effective for street and high-performance street applications because they have excellent spring pressures, load the clutch disc evenly throughout the entire diameter and the springs have a break-over point. This means that the clutch pressure will reduce significantly at the point which the springs are over centre. When you are stuck at a traffic light, your thigh will thank you.

Long style is more often seen in strictly drag racing applications. The Long style uses three narrow fingers that couple the release bearing to a group of nine springs around the pressure plate. In order to release the clutch, the 9 springs must be compressed. This design is very popular for drag racing applications for quick shifts. The Long style is very tuneable through spring rates, stand height and centrifugal weights. The centrifugal weights add additional force on the clutch as the engine spins faster.

Borg & Beck is a version of the Long style that uses three fingers to compress springs for disc release. The Borg & Beck style uses rollers that swing out as the engine revs to increase disc pressure.

Signs of a Bad Clutch

When your clutch is going out, there are a few tell-tale signs of impending doom.

As the friction plates wear away, there is less material there to grab the flywheel and pressure plate. Once the material has worn away enough, the engine will rev a little higher than normal when the clutch is engaged (pedal released). This is because there is not enough friction to hold it tight. Additionally, you might notice that the clutch disengages faster than usual, as in you don’t have to press the pedal in as far. Acceleration of the vehicle will also be slower. This is the most common problem for clutch wear. A slipping clutch will also smell like burning clutch, which is unmistakable.

If the clutch does not disengage when the pedal is pushed, it could be caused by a few issues. There are three types of clutch linkage – hydraulic, cable, and rod. A rod linkage is a solid mechanical link between the clutch system and the pedal. If this type of clutch is stuck, it is always a problem with the pressure plate or throw-out bearing and will require replacement. This can happen with the other types as well.

Cable linkages use a cable between the pedal and the clutch system to operate the throw-out bearing. The cables can break, hang up or stretch out of adjustment. Some of these are self-adjusting, but others require periodic adjustment to maintain proper clutch function.

Another issue that comes up is a hard clutch, where the pedal is stiff and won’t disengage the clutch. This is usually due to a bad pressure plate and will require replacement. Other potentials in this scenario are a jammed linkage or bad master cylinder.

Often, all three must be replaced, but in most cases the clutch pack (pressure plate and clutch disc) can be replaced, along with the throw-out bearing. The bearing is a high-wear item, and unless it was recently replaced on its own, it is just a good idea to replace it whenever a new clutch disc is installed, unless it is a hydraulic bearing, in which case it can be reused.

The flywheel, however, does not have to be changed. If the flywheel surface is clean, free of grooves, discoloration or gouges, then it may be reused as is. If the surface has any defects, it needs to be checked. Remove the flywheel, take it to your local service centre and have it checked to see if it can be turned. Just like a brake rotor, the flywheel is made extra thick so that it can be surfaced when the clutch eventually goes out, saving you the cost of replacement. A flywheel can be machined to remove the defect caused by a worn-out clutch in most instances, but not always. Deep gouges, cracks and severe heat damage will require complete replacement. You should always have your flywheel checked regardless of how it looks. Flywheels can warp and though you won’t see it, you will feel it when the new clutch is in.

Dangers of Changing a Clutch

The main danger that you will face when changing a clutch is something smashing your face or body. Unless you have access to a lift, you will be working under the car, the transmission must be removed, the engine must be supported so it doesn’t break from its mounts. This equates to a lot of heavy items waiting to smash your face into the back of your head, so be careful. You will want a helper there to help remove the transmission, a floor jack helps here too.

Aside from the perilous nature of working under a car, hydraulic clutches must be adjusted. There are special tools available to help you do this, or you can do it the hard way with a set of callipers. Be sure to follow the specs provided by the manufacturer. If you set it up wrong, it all has to come back out to fix it.”